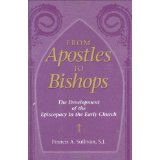 A few years ago I began to study the Catholic faith in which I was raised. And the findings of that study were disturbing. Whereas we had always been taught that the Pope of Rome was the “Vicar of Christ” and one who is directly descended from St. Peter – in unbroken succession no less – who was the first bishop of Rome. And that was a “truth” that we were required to accept de fide, which means something foundational and beyond question. But the truth of the matter as I was to find out – and affirmed by any number of Catholic scholars today is that not only is that not true – it is not even possibly true. And so I had to ask myself how the Catholic Church could require me to believe something that is not true and make believing in it a requirement for membership and even for my salvation? Would Christ build His church on a lie?

And so it was with great interest that I came upon Francis Sullivan’s book cited in the title. My first reaction was skepticism because I wasn’t sure how Fr. Sullivan would approach this topic. Those two letters after his name – SJ – identify him as a Jesuit; one of the “pope’s men”. So I doubted very seriously whether his station in life would allow for him to make an honest assessment of the matter. But I was pleasantly surprised by his candor throughout the book while maintaining my disappointment at his conclusions the disunion of the two being fertile soil for observations I may make later.

The book is comprised of eleven chapters which cover the period from the Apostles to Cyprian and includes an introductory chapter outlining the nature of the issue and a concluding chapter inquiring whether the successors to the Apostles were so because of divine institution, or not.    The depth of Fr. Sullivan’s effort is such that this review must cover several parts.

The divisive nature of the Catholic stance on the episcopacy is acknowledged by the author in his introduction:

The question whether the episcopate is of divine institution continues to divide the churches, even though Christian scholars from both sides agree that one does not find the threefold structure of ministry, with a bishop in each local church assisted by presbyters and deacons, in the New Testament.[i]

And shortly thereafter he notes what historians now universally affirm that the development of the episcopacy “took place earlier in the churches of Syria and western Asia Minor, than it did in those of Phillipi, Corinth and Rome.”  And that not even Rome – whose later claims bind the consciences of its members to the contrary – had a bishop:

…but hardly any doubt that the church of Rome was still led by a group of presbyters for at least a part of the second century. [ii]

It is helpful at this early point to reflect.  What Fr. Sullivan has done so far is establish that the Catholic stance on episcopacy is a divisive issue, but for whom?  It is not divisive within the confines of Roman Catholicism which teaches its necessity.  Nor is it divisive within the ranks of Protestantism which proclaims its novelty.  I suspect that at this early point we may discern the working of the Holy Spirit in Fr. Sullivan’s heart such that he tacitly acknowledges that the true Church of Jesus Christ does not subsist wholly in the church of Rome.  In other words, he believes – at least implicitly – that Christ’s church exists truly beyond the bounds of Rome.  How else could this issue be divisive?

The author then does an about face as he lays out Rome’s case for the episcopacy.  Relying on the work of a 1998 conference of British bishops, Sullivan ties “eucharistic communion” with “ecclesial communion” seeking to justify Rome’s aberrant practice of “closed communion”.

There is a basic incongruity involved in regularly sharing the Eucharist in a church with which one is not in full communion, and in receiving it from a minister whom one does not recognize as one’s pastor.[iii]

But apparently Greek Orthodox priests can be considered “pastors” for Roman Catholics:

What justifies the sharing of Eucharist between Catholics and the Orthodox and other Eastern Christians is that they not only share the same faith with regard to the sacraments of Holy Orders and Eucharist, but also recognize one another’s Eucharist as fully valid, for those who celebrate it are ordained by bishops who stand in the historic apostolic succession.[iv]

But isn’t one justified in asking how a Roman Catholic can be bound by such a proclamation when the author has already shown that there were NO bishops in Rome for a century and a half after Christ?  Does Fr. Sullivan mean to say that Roman Catholics can only take communion from Orthodox bishops who are descended in the episcopacy from the early Eastern Church as he notes above?

Glossing over such obvious contradictions, the author digs deeper:

Belief that bishops are the successors of the apostles by divine institution grounds the Catholic insistence that episcopal succession comprises an essential element of the permanent structure of the Church, on which the validity of its sacramental ministry and the authority of its official teachers depend.[v]

Now this ahistorical insistence is not without its problems.  And to the author’s credit he is able to ‘fess up to one instance the implications of which undermine his assertions and the unresolved nature of which negates his premise:

In Sweden and Finland, however, the first Lutheran bishops were ordained by a man who had been a validly ordained Catholic bishop. To my knowledge, the Catholic Church has never officially expressed its judgment on the validity of orders as they have been handed down by episcopal succession in these two national Lutheran churches.[vi]

Have not these Lutheran churches participated in the “essential element of the permanent structure of the Church”?  Cannot these “validly ordained bishops” in “apostolic succession” administer the Eucharist just as a Roman priest?  The reason that Rome has not pronounced on this issue is obvious.  Any decision would undermine Rome’s position on the episcopacy and its necessity as laid out by Fr. Sullivan.

The author draws this chapter to a close with these obvious, of not contradictory observations:

Admittedly the Catholic position, that bishops are the successors of the apostles by divine institution, remains far from easy to establish… The apostles were missionaries and founders of churches; there is no evidence, nor is it at all likely, that any one of them ever took up permanent residence in a particular church as its bishop.[vii]

In closing, I hope to have whetted the reader’s appetite as mine was when I discovered this book.  The self-contradictory nature of Roman Catholicism is laid bare by the facts of history.  And in part of what makes these times so fascinating is that Roman Catholic scholars are now free to indulge in the miasma of Roman Catholic teaching.

Next time we’ll explore Fr. Sullivan’s analysis of the Apostles’ role in this fairy tale.

What the Hell is going on

Thoughts and writings of Fr. Joseph A. Komonchak

My lies will get better

Comments on the New Testament and Early Christianity (and related matters)

A Christian's Road Home to Rome and Journey Onward

Beggars All: Reformation And Apologetics